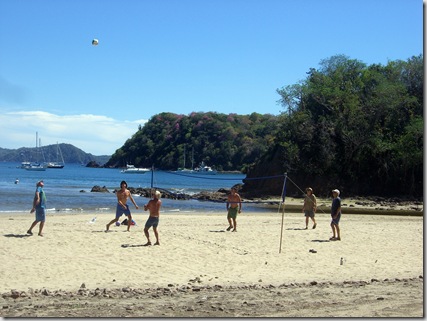 “GOOD MORNING! Welcome to the Gold Coast Cruisers’ Net serving Tenacatita, Barra de Navidad, and Manzanillo.  This is Hermi on the sailing vessel Iwa.  It’s Wednesday, no Tuesday….  Actually—sorry!—I lost track.  I’m pretty sure it’s February.  Does anyone know what day it is?  <<silence>>  OK, my husband just informed me that it’s Thursday!

“Does anyone have emergency or priority traffic?  <<Silence>> Nothing heard.  Always a good sign.  Any vessels arriving or departing this area, please come ahead with your vessel name….”

The friendly voice coming through the radio is a fellow cruiser who has volunteered to host the Net, although sometimes this honor is thrust upon unsuspecting cruisers in the spirit of fun and entertainment value.

Joe getting his morning net fix in Barra

The Cruisers’ Net typically lasts about 30 minutes and includes topics like local services, lost and found, general announcements for the fleet, weather and tides, and jokes and trivia. But in Tenacatita Bay, where we’ve spent the past two weeks, the general announcements are the most anticipated part of the Net.

“Anyone with general announcements come ahead with your vessel name.”

(Imagine a 60-something Latino woman, with a sultry accent, speaking now.) “Hellloooooo!  This is Rita from the sailing vessel Overheated in Tenacatita bay.  I am hosting the swim-to-shore today at 1:30PM off our sailboat.  We’re the liiiiiight  blue sailboat in the wehhhstern side of the anchorage.  It’s a niiiice, leiiiiiisurly swim to shore.  Everyone is welcome. When we arrive on the beach we’ll walk to the Blue Bay hotel and back. I’ll bring my dominoes so we can play Mexican Train under the palapa afterwards.  Overheated on the side.”

“Thanks Rita! See you at 1:30! Anyone else have an announcement for the fleet?”

(Now imagine a gruff, but friendly, 70-something man speaking.) “This is Phil on Maradon.  At 2:00PM I’ll be setting up Bachi ball on the beach and at 3:00PM I’ll set up the volleyball net.  You don’t have to be a pro—just show up for some exercise and fun.”

This is how a typical day begins on Delos.  We leave the VHF on overnight for two reasons:  First, it’s the primary means of communication between boats should anyone need to reach us.  Second, it’s a great alarm clock.

The number of boats with kids in Tenacatita Bay is astonishing—some cruisers have dubbed this bay “Bahia de Los Ninos.”  We’ve counted at least 15 kids ranging in age from 3 to 11.  With all of the adult and kid activities going on everyday on the beach, we can’t help but think of this as a kind of summer camp during the winter.

There’s a palapa on the beach that serves as camp headquarters, and everyone gathers here in the afternoon to cool off with their beverage of choice.  The volleyball players show off their spikes in the sand just beyond the palapa, kids play in the surf with boogie boards or participate in treasure hunts, and Rita conducts a heated game of Mexican Train under the shade of the thatched roof. Recently the crew from s/v Third Day spent three full afternoons repairing their blown-out mainsail with their own sewing machine and portable generator on the beach.  It was a community effort, with Brad on Capaz offering sage advice and another set of hands. When they were finished the sail was better than new.

When we’re not participating in summer camp activities we’ve spent time diving (one of the best so far), snorkeling, kayaking, swimming, and lounging on the boat.

Our catch from spear fishing

After nearly two weeks in beautiful Tenacatita and almost two months on this 15-mile stretch of the Gold Coast, we can’t deny the effects of slowing down.

Back in December, while my brother Brady was visiting, we went diving in Banderas Bay just outside Puerto Vallarta.  My brother is a much more experienced diver than us, having spent the last two seasons as a rescue and master diver with the Florida Sea Base in the Keys supporting the Boy Scouts.  After surfacing from our dive at Tres Marietas he asked me why I was swimming so fast.  Without much thought I replied, “Well, I want to see as much as I can.”  He then relayed a story about an even more experienced diver he met in the Keys, someone that had been diving for over 30 years when the sport was still in it’s infancy.  The advice was this: “Go slow. You’ll cover less ground but you’ll actually see more.”  I feel like I’ve truly embraced this philosophy over the past few months.

In the back of our minds we’re starting mental preparation for the next phase of our cruise: a 3000 mile, 20+ day sail to the Marquesas in French Polynesia.  We’ve joined the “Puddle Jump,” a group of boats departing Mexico around the same time headed for the South Pacific.  There are over 100 boats signed up but from what we’ve heard from Puddle Jump veterans, about half of those will actually depart Mexico this spring.

Soon enough we’ll be inundated with provisioning, spare parts, weather forecasts, and getting the boat ship-shape for the passage.  We know the last few weeks in Mexico are going to be a mad rush as we set ourselves up to be self-sufficient to cross an ocean and cruise desolate islands without provisions for months on end.  But for now, while we still can, we’re going to spend a few more days at summer camp.