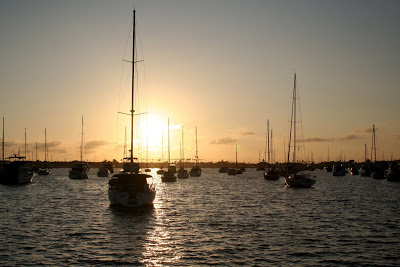 We’re anchored in Mission Bay, five miles north of San Diego, waiting out a gale that blew in yesterday. It was supposed to have passed by now, but the anemometer is still pegged at 23 knots with gusts in the 30s.With every gust, the boat gets pushed around and the anchor chain stretches out, causing loud creaks to reverberate throughout the boat. The wind is growling and sighing like something out of a horror film, which makes sleep a challenge for me… On windy nights, I tend to sleep with one eye open. The good news is that today it’s sunny and warm — not a cloud in the sky. If we were still in Seattle, we’d see driving rain and plummeting temperatures in addition to the wind. So I can’t complain too much, I suppose. We arrived in Mission Bay late Sunday night and we’re planning to leave tomorrow after the wind and swells die down. Boats can’t anchor in Mission Bay or San Diego Bay for more than 72 hours, so we’ll head to a dock in San Diego before we overstay our welcome and get a ticket. While in San Diego we’ll run errands, finish boat projects, stock our cupboards with as many non-perishable Trader Joe’s items as we can fit, pick up a collection of packages, check the weather religiously, and pick a day to sail down to Mexico. We’re on our way! It’s funny… I can’t shake the feeling that something big is on the verge of happening. There’s the obvious: we’re leaving the familiar waters of the U.S. and sailing to Mexico soon. But I can’t help but feel there’s something more. Something just over the horizon, around the bend… Something that I can’t quite put my finger on. Perhaps it’s the prospect of accomplishing something significant. I know that people sail down to Mexico every year — in fact, our friends Brad and PJ are on their way right now, one of 200 boats in a rally that left San Diego on Monday. But when we arrive at the southern tip of the Baja peninsula, I’ll have logged about 2500 miles of coastline since leaving Seattle; weathered storms at anchor, dock, and sea that challenged my fortitude; sacrificed hours of sleep to keep the boat out of harm’s way during night-time passages; and seen an incredible amount of marine life, including thousands of dolphins, and pods of Orca, Blue, and Grey whales. I’ve spent the past two months staring the unknown in the face, and it’s never ceased to amaze me. Or perhaps it’s the change in latitude that I’m feeling. At 32 degrees N, there’s a physical dimension to the air — a surge of electricity that charges through your veins. Here, where the temperature rarely drops below 75 degrees, people surf in the morning and sail in the afternoon. Our friend Kevin walked to the bank one morning only to find that they don’t open their doors until 10 a.m., after their morning jaunt to the local surf break. You can’t fight it, and you’d be silly to want to. It’s taken us awhile, but we finally feel like we’re on a true vacation, a real escape from the daily grind. It set in when we were in Newport Beach last week — a gorgeous golden sand beach in Orange County, with waves perfect enough to lure even the most novice surfer. After a day of walking on the beach and staring out at the waves, Brian and I decided to rent a couple of surfboards.

At first it was all work and no play. The waves that looked so beautiful from shore became standing walls of water as we paddled out to them, breaking repeatedly on our heads and pushing us down beneath them. Their siren song quickly changed from a lullaby to an acid-rock ballad, and our triceps screamed in agony as we propelled ourselves past the breakers. When finally we arrived beyond the break we sat nervously on our boards waiting for a wave, any wave… Our first wave.After a few minutes, I saw it: a perfect swell that was shaping up to be a perfect wave. I turned toward the beach and paddled as fast as I could. The wave crested and whitewater churned underneath my board as I plummeted down the face of it. I held on to the board as tightly as I could and laid flat on my stomach, trying not to move a muscle. The ride lasted only about two seconds before I was tossed under the wave like a cork. But I came up victoriously; giggling and grinning from ear to ear, ready to do it all over again. I was hooked.We spent all afternoon getting pounded by surf and rewarded by better and better rides — I even stood up a few times. The next day we did it all over again. And by day three, we convinced ourselves that we needed our own boards. We bought two 9’2″ longboards from Russell surfboards and went back to the beach for a few more rides. Just before sunset I sat on my board out beyond the surf break, listening to the waves crash behind me and watching the giant orange orb sink below the horizon. At that moment I felt an overwhelming peacefulness, like everything in it had been created just for me. It was a perfect ending to a perfect day.

I can only hope that whatever is on the verge of happening, this thing that I feel is just beyond the bend, is as good as that moment was. Too often I’m fighting against whatever is happening to me, and trying to shape my world into what I want it to be. But if I can find that peacefulness again, even just once more — to feel connected to the world and stripped of the complexities that I tend to lug around with me — the howling wind, the sleepless nights on watch, and the challenges that we face every time we set out to sea will have all been worth it.