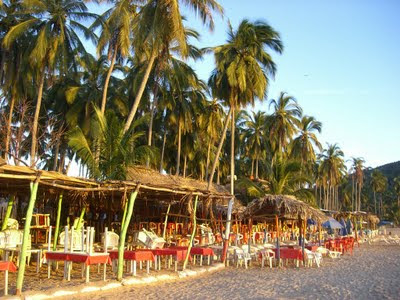 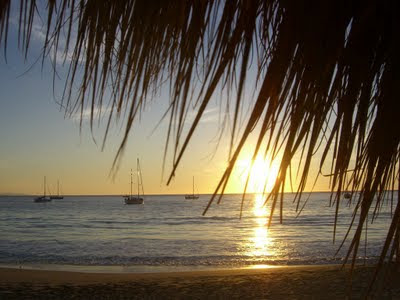 Who Ya Gonna Call? GHOSTBUSTERS! was the song stuck in my head all afternoon. The Mexican bars sure love their American music. In La Paz 1 of only 3 radio stations was dedicated to American classics from Air Supply to Sting, mostly from the 80’s and 90’s.We’re currently anchored a few hundred feet off the beach in Chacala, Mexico. The theme of Ghostbusters is just audible over the crash of the breaking surf. The anchorage is slightly rolly because the west is completely exposed to the the Pacific Ocean. We set a bow and stern anchor to always keep our bow into the swell, something we haven’t done since the Channel Islands anchorages in California.

View of Chacala from Delos.From our vantage point in the bay we have a tremendous view of the bars that lay on this stretch of beach. Lush green hills and coconut palms serve as a backdrop for the small village of Chacala. A bright yellow sign welcoming “cruissers” is visible on the roof of the Playa Bar, making it known to the anchorage that they have food, drinks, wi-fi, and even showers for weary boaters. Impressive homes dot the hillsides like the Mexican version of Malibu. The colors are much bolder than their American counterparts with Red, Yellow, Turquoise, and Orange standing out brilliantly amongst the tropical foliage. Other than the music and surf it’s eerily quiet and still. There are 3 children playing on the entire beach and no patrons in the restaurants. When we sampled the Pina Coladas yesterday afternoon there was only one other table seated.

We arrived yesterday afternoon after a short 20 mile trip from San Blas. As we move further south we find the charts are off from our actual GPS position by almost 2 miles in this area. According to our navigation system we’re anchored somewhere in the hills looking down upon Chacala. We spent most of our passage scanning the horizon with binoculars for rocks that may or may not be there. According to our cruising guide there are a number of rocks that have been reported in the area but no definite position recorded. Better safe than sorry. I remember seeing a last survey date of 1910 on a chart we were studying.Anchorage view of Delos.We saw more whales on this passage than any other. We counted 4 separate pods and at least 20 individuals, all humpbacks. Our closest encounter was about 100 feet away with the giant gracefully breaching the surface for a breath before arching his back to dive again. The humps on his back broke the surface then submerged for almost 15 seconds before the tail slap signified he was done. We didn’t catch any fish although we had one solid bite that triggered the fish alarm (empty beer can on a string). For a while we were harassed by a cormorant that repeatedly dive bombed our trolling lines. Luckily he wasn’t very skilled and couldn’t time the dive correctly. The last thing we need is an angry bird on deck with a hook in its beak.

There isn’t much of a town beyond the beach front so we’re enjoying our time walking the beach, kayaking, and generally doing the reverse of a Corona commercial (sitting on the water and watching the waves roll into the beach). The water is the warmest we’ve found yet, easily in the low 80’s. In a few minutes we’ll swim the beach bar for our afternoon ritual of drinking Pina Coladas while the sun sets. Tomorrow we’ll be heading south to the Bay of Banderas where we’ll spend a few weeks in the Puerto Vallarta area for the holidays.