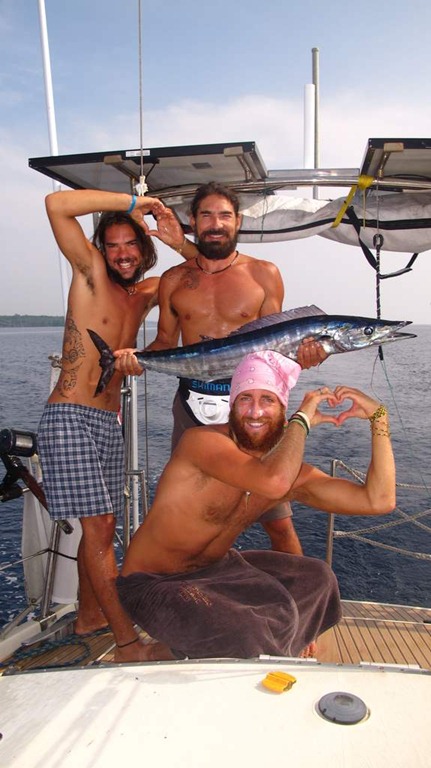 We left Ghizo, Solomon Islands with a forecast for light and variable winds and were prepared to motor for a day or so looking for breeze. Fortunately the passage gods smiled and gave us 5-10 knots right out of the reef. This built to 15-20 and stayed with us for the entire passage giving us one of the best sails we’ve ever had! Just days and days of constant, beautiful beam reaching. And Delos really loves a good beam reach with the big jib unfurled and both main and mizzen pulling nicely. The seas were calm and the weather fair. This is the stuff you see in the movies. Just a sailboat alone in a great big blue ocean gracefully cutting through the seas. We had planned on a 6 day passage to cover the 850 miles between Solomon Islands and Cairns, Australia but arrived in just over 4.5 days. There were days on end where the knot meter didn’t dip under 8 knots, and often hovered around 9 for hours at a time. Doing 200 mile days in a sailboat is pretty fricking cool!
Customs and Quarantine officials were super nice and cleared us within minutes of arriving. By 11:30 we were playing the didgeridoo and by noon we were at McDonalds. Arriving in a new port is always exciting but getting to Australia is a MAJOR milestone for us. It’s taken 2.5 years and nearly 20,000NM of sailing to get here.
Naturally when you spend time in the islands you get acquainted with the simple lives of the local people. The biggest, nicest towns in the islands pale in comparison to even a small city in a place like Australia. We walked around in a dazed state for a while mesmerized by the things that most people take for granted. There were sidewalks, water fountains, swimming pools, and huge buildings full of shiny things. Amazing stores stocked with every kind of cheese, vegetable, and meat one could wish for. We spent at least an hour wondering through Woolworth’s before settling on a bag of avocadoes, cream cheese, and some baguette. Yummy!
So far we’ve:
1) Eaten at McDonald’s 6 times and now feel sick. Pretty sure that’s out of our system.
2) Saw Paranormal Activity 3 at the theatre. No, it’s not related to PA 1&2. JK!
3) Partied with backpackers at Gilligan’s and The Woolshed. And had way too much to drink both times. Felt sick and needed to eat McDonald’s to absorb the alcohol. Didn’t work. Josje did win a wet t-shirt contest though so that was cool.
5) Fixed our bike that’s been rusting away in the back locker for 7 months and broke it in the same day.
6) Spent countless lazy days lounging at the pool and BBQing at the park watching Zumba in the background.
7) Did our best to fill our bodies up with fresh milk and real juice, neither of which came from a powder!
8) Visited the home brew shop to stock up on beer making supplies.
9) Checked out this internet thing. Got bored with it pretty quick!
10) Found out that Moevember is in full swing and Aussie’s take it really seriously. Spent some time on our gnarly facial hair to fit in.