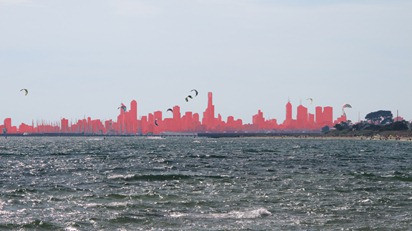 Wow, if you asked me where I’d be living 4 years ago I’d never, ever have guessed Melbourne (pronounced Melbin’).  But yet here I am living on the South coast in the Land Down Under.  I’m only 300 miles from Tasmania!  Life’s strange like that.

After leaving the tropical paradise of Hamilton Island and the Whitsunday’s Delos bashed her way another 400NM south to the fair city of Bundaberg.  The sail was, to put it mildly, less than enjoyable.  Beating your way into a constant 25 knot breeze is no picnic.  Unfortunately with the season winding down and our bank accounts getting into code red levels we needed to go and didn’t have the luxury of waiting for the occasional northerly to roll through.  So we left in the dim light of dawn and prepared ourselves for 5 days of beating.  Finally the last day brought fair weather (no breeze) and we motored the last portion under beautiful, clear sunny skies. We parked Delos at the Bundaberg Port Marina, spiffed her up for long term storage, and rented an Australian classic- non other than a Holden Commodore.  We had an awesome road trip down the east Coast, stopping to visit some sailing friends that Delos met in seasons past and hitting the theme parks along the way. When we didn’t have a friendly place to crash (which wasn’t often) we made use of the abundant parks and camped as we meandered our way through Queensland and New South Wales making stops in Brisbane, Surfers Paradise, Byron Bay, Sydney, and many other places we can’t spell let alone pronounce.

For two months Brad and Kat from SY Ghost turned their beautiful Melbourne home into a sort of a half-way house for land locked sailors.  Somehow they managed to tolerate our company as we lost ourselves in their immense galley (kitchen), took ridiculously long and hot showers in their head (bathroom), and enjoyed the spacious bunks (beds) in their (cabins) bedrooms.

And now, we actually have a place of our own!  Adorned with artefacts from Fiji, Vanuatu, and Solomon Islands we’ve turned a little apartment on the outskirts of the Melbourne CBD into home for now.  So here we are in an apartment that is huge by our standards, but probably barely liveable by most.  We were able to completely furnish a 2-bedroom place for an amazing $900 (including fridge and washer) by making good use of Gumtree, the Australian version of Craigslist, and a whole lot of dumpster diving.  You’d be amazed what perfectly good stuff people throw away or just leave out on the curb.  And Brady really is a master, seeming to come home with something nearly every day.

Melbourne is an amazing city of nearly 4 million people. It was voted the “Most Liveable City in the World”, seriously it’s on Wikipedia so it must be true. There is incredible public transportation, museums, festivals, and food. There are boutique coffee shops and breweries, and a ridiculous number of trendy bars and clubs. There’s even a deck of cards you can buy that has all the hot spots for late hour entertainment. Can’t make a decision? No worries mate, just shuffle the cards and grab the top one off the deck. It’s about as culturally diverse and rich as one could hope for. In fact, our apartment warming had no less than 11 different nationalities in attendance (Norwegian, Finnish, Swedish, Macedonian, German, Columbian, English, Mexican, American, a Kiwi and even a few Australians).

So here we are with the internet piped directly into our veins.  We have unlimited water, electricity, and there’s even a Woolworth’s right across the street that has wonderful things like chocolate ice cream, avocadoes, beer, and seemingly unlimited supplies of REAL juice.  No more “juice mix” for us thank you very much!  Josje and I have even joined the neighbourhood gym and taken up a kickboxing class.  I accidently took a Les Mills Body Attack class and vowed to never again subject myself to that sort of embarrassment.  I just don’t have the coordination required to dance and workout at the same time…..

And yet somehow I still feel a little unsettled.  It’s a huge transition from the sailing life to “big city life” and I find my mind wandering and really miss sailing.  One of the things I promised myself was that I’d bring a part of the sailing life with me wherever I travelled.  Just because I’m not cruising on a boat doesn’t mean I can’t still cruise in the city right?  Well I’m finding that it’s easier said than done.  My copy of Tao Te Ching lies untouched on my shelf, and I spend more time working on the computer than I do outside.  Such a contrast from the last few years.

So, while all our sailing friends are on their way north towards Indonesia for the season we’re busy working and living the city life.  I’m back to writing software (and reading our friends sailing blogs), Josje is scooping ice cream, and Brady is back to mastering the art of the perfect burrito.  The plan is to save up money to continue on sailing.  Until then when I wake up and wish I could go for a refreshing swim right off the back of the boat, or a spontaneous scuba dive I’ll make it a point to seize the moment and get the most out of this amazing place that I find myself living in.

And by the way, does anyone know how the hell the Chicken Parmigiana became the national dish of Australia?  Seriously, it’s on every pub and restaurant menu.  And this isn’t just in Victoria, we saw it in Queensland and New South Wales also.  Where an American might grab a burger on the run an Aussie will “Suck down a parma mate!”.  I’m not complaining- it’s absolutely delicious and relatively cheap but it is baffling how this Italian dish became an Aussie staple. Any ideas?