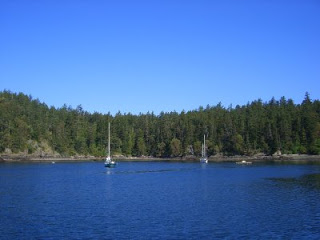 On a beautiful summer day in Redmond a few years ago Erin and I made a short stop in the public library. I don’t know or remember what we were looking for, but I do know that what we found literally changed the course of our lives. We browsed the shelves looking for nothing in particular when a book with a vibrant blue cover caught our eyes. The cover was a map of the Pacific Ocean and the title mentioned sail boats. We were intrigued! We spent the rest of the afternoon lazing about in the sun and leafing through the book in a city park.

Although we were on our 2nd sailboat over the past 6 years it never occurred to us that we could actually leave the comfort and safety of the Puget Sound and sail across the ocean in a boat that we owned. The prospect of traveling had always intrigued us, and the thought of traveling by sea to exotic destinations was absolutely thrilling! As we dug deeper into the book we saw pictures of turquoise blue water, sandy palm fringed beaches and pictures of natives from various South Pacific islands. There was a lot of talk about sailboats, and what type of vessel was necessary to make such a voyage. There were discussions on fuel, water, food storage, and power generation. As we read on we discovered that long passages in the 20-30 day range are possible and you had to be totally self-sufficient to keep yourselves happy and healthy while thousands of miles from land.

And so it begins…. I’m sitting on the aft deck of our Amel 53 “Delos” enjoying the morning sun and view from our anchorage in Friday Harbor, Washington taking a few minutes to reflect. The skies are clear and the weather crisp. We’re taking a long weekend to enjoy the Memorial Day holiday with friends exploring the San Juan Islands and a much needed breather from our trip preparations. Lately our heads are spinning with plans and preparations both for ourselves and Delos. Traveling the world by sailboat is not an endeavor to be taken lightly and we’re at the tail end of 4 years of research and preperations.

We have just over 4 weeks until we head north to Canada for our month long shake-down cruise, and less than 3 months before we head out the straights of Juan De Fuca and make a left turn- destination San Francisco! From there we’ll head to Southern California until November, then Mexico, Costa Rica, Panama, Galapagos Islands, French Polynesia, South Pacific, New Zealand and beyond. We’re keeping the schedule loose and trying our best to avoid hard dates in our plans. Basically, we’ll go where the wind blows. We don’t have an absolute time frame in mind but we’re thinking a few years or until the money runs out! I’m certain there won’t be a lack of places to explore.

Thanks for taking the time to read this. I plan on posting more as launch approaches!