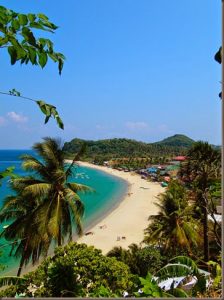 We’re in Oregon waters! The Columbia River is about 40 miles to the East of us, and we’re heading south at 5.5 knots (about 6mph). Not fast, but we’re sailing. Last night on watch from 10pm-2am the wind picked up to 20 knots and we turned off the engine — the first time we were able to turn it off since we left Shilshole at 6am. It was a lovely evening… the fog cleared at about 11pm and no one was in sight on radar, so Joe, Harold, and I set the sails and enjoyed a few hours of stargazing. We must have caught the tail end of a meteor shower because between the three of us we saw about 20 shooting stars.

We’re all feeling good — we’re getting our sea legs and adjusting to the pretty big swells out here. This morning in the cockpit I was looking up at swells rolling in from behind the boat, each one easily around 20 feet overhead. The swells out here are big and gentle, though, so they slowly pick us up, set us on their back, and then lower us down in the trough to await the next ride.

Today was Autumn’s birthday. We celebrated with a real dinner — Brian made carne asada tacos and Ryan brought a cake for dessert. It was nice to eat something besides Cup o’ Noodles, which was all any of us could manage to eat yesterday.

It’s hard to believe we’ve only been going for 36 hours. Out here, with no land in sight, it feels like we’ve been out for weeks.

It’s my turn for watch so out in the cockpit I go… The wind is light right now, so we’ll probably pack in the sails and turn on the motor. With any luck the skies will stay clear and we’ll be in for another night of stargazing.