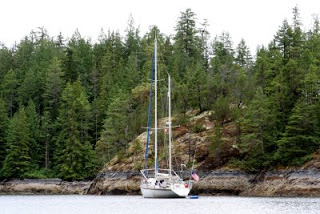 A few weeks ago a buddy from high school came into town for a conference. We were sitting around one afternoon in the boat chatting about our cruising plans. I was going on and on about our preparations. The windlass was acting up, mizzen sail needed repairs, refrigeration serviced, navigation computer installed, and on and on and on. Between planning our wedding for August, getting Delos ready, and preparing to turn Personify Design over to my partners we’d been heads down for the last few months.

He asked a very poignant question which gave me pause. “Brian- you guys have a lot going on here. Careers, a house, friends, your company. Why are you taking this trip? What do you want to get out of this trip over the next few years?” Erin and I had discussed this at length but this was the first time I talked about it with anyone else. I’ll have to admit I was initially a little tongue tied as I searched for the words to describe my thoughts. Although Erin and I started planning for this trip years ago we always could put the brakes on at anytime. We could live happily in Delos, continue our careers, and continue to rent the house out. After all, we were very comfortable and loved living on the water in Ballard. We had lots of friends in the sailing community. We knew the great spots to eat and relax. There were a dozen amazing sailing destinations within a day’s travel. After nearly 10 years we were finally feeling situated in Seattle and had built a great life and home. I finally had a handle on the company and hadn’t worked late or a weekend for months. Our cars were paid off and we were socking money into savings at a great pace. Things were very comfortable!

Back in December Erin drove to California to spend some time in Manhattan Beach. I flew down a week later and we spent the next 2 weeks driving to Tucson for Christmas, then to Big Sur for New years. We had plenty of time and little distraction on the road between Tucson and LA. I remember Erin negotiating the insane California freeways while I alternated between navigating and writing one hell of a pro and con list. To cruise or not to cruise- that is the question we were trying to answer. We wanted to make sure we were both doing this for the right reasons. This was neither an escape nor a lengthy vacation. We weren’t running away from ourselves or responsibilities. The trip would only be worth it if we felt our lives were in order and it was an opportunity to grow, travel, and move us to the next phase of our lives.

I personally felt that for my entire live I never had an opportunity to have down time. I had a job in high school then went straight to the university. While studying Electrical Engineering I worked full time often working 60+ hour weeks to pay for school and living expenses while others enjoyed leisure time after class. I worked during the year 2000 millennium celebration on call covering the 911 system in case of failure. When Erin and I were in Venice I spent an entire evening making updates to support a new Baby Bunny Suit for the Anne Geddes website. Ridiculous I know- but it seemed really important at the time. I went straight from school to Microsoft then left Microsoft to devote all my waking hours to Personify Design for the past 7 years. There was never a quiet time, never a time to reflect. The more I began to think the more I realized that I had always let my current goal define myself. I had lost track of who I was outside the professional world that surrounded me day in and day out. In reality I had never slowed down to smell the roses- to see who I was when my nose wasn’t to the grind stone.

We both felt to move onto the next phase of our lives a sabbatical was in order. I have absolutely no idea what we’ll do when we come back. We could be completely changed or we could be absolutely the same. I’m really fine either way. There is one common theme though- I figure later on in life we’ll never look back on our lives and wished we hadn’t take a chance or a risk. We’ll never wish we’d stayed around to make a few more bucks, buy a bigger TV, or a larger house in a more impressive neighborhood. Shouldn’t we be having kids and furthering our careers? All our friends seemed to be doing this right now. We initially felt a bit selfish for having this amazing opportunity and making our decision. In the end we both came to the conclusion that this was but one turning point in the long and winding road of life. If by taking this opportunity we can learn more about ourselves the chances of coming back and being truly successful in whatever we wanted to do would be greater. We were going to take this opportunity and figure out the rest later. Hopefully it will allow us to move to the next phase- whatever that may be.

Definition of the term “Cruising” from Latts and Atts Magazine June 2009- “From the Dutch word kruisen, which means ‘to cross’. It was originally used only to describe the sailing style of pirate whips which zigzagged and meandered through the shipping lanes searching for ships to pillage. Since they weren’t on a specific schedule, the term eventually was borrowed and altered to cruising which applies to any pleasure voyage.