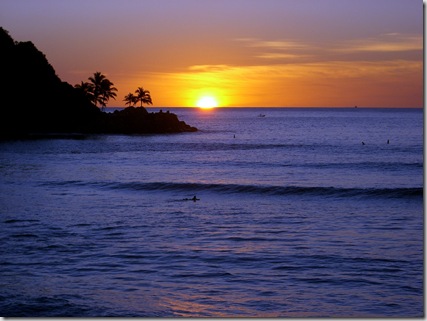 i, I am Rebecca Fabos.   Alan and I (Erin’s stepdad and mom) just returned from a much too short visit with Erin and Brian on Delos.  Brian said, “Brady wrote a blog piece so I think all of our guests ought to write one.”   Now that the introductions are over, and blame firmly established, let me begin.

Delos was anchored in the Barra Lagoon which is about a 10 minute dingy ride from Barra de Navidad.  Erin and Brian were concerned about the logistics of getting us from the Manzanillo airport to the dock in Barra and arranged for a taxi driver named Nacho to pick us up at the airport.  Alan’s and my worry was how to find him.  The airport is so small that this turned out to be a moot point.  Exiting customs and at the street exit was a man holding a sign with our names written on a piece of paper.  I asked if he was Nacho and he said no but he would take us to him.  He took us to a taxi driver.  I ask this man if his name is Nacho and he said no but he knows where we are to go.  That is Mexico.  We got into the taxi and off we went.  Both sides of the road from the airport to Barra are planted with Coconut groves, Mango orchards and Bananas.  The hills are lush with vegetation.  Once we were near Barra, we drove through the most verdant resort grounds seeking the boat dock.  After several wrong turns, we found the boat dock and Erin and Brian, said good-bye to our driver (Martin), loaded the dingy with suitcases and people and our vacation began.

What I first noticed about this part of Mexico was the color.  The poorest looking establishment may have a Dieffenbachia growing in a bucket by the door; trumpet vines are growing on trellises; and the fuchsia coloring of bougainvillea dots the hills.  The humidity is high, the water blue, the flora a verdant green– tropical paradise.

The town of Barra is on a peninsula bounded by the lagoon on one side and the Pacific Ocean on the other.  It boasts a town square and a main street.  It is a tourist town without the large building growth that fills the beaches in the States.  Its small size makes it easy to get around and explore.  I’m not sure you could stock up on supplies in Barra but, a short bus ride will take you to other towns around the area that are known for their markets.

One afternoon, we ventured forth and took the orange and white bus to the town of Melaque.   It was 6 pesos per person for the one way trip (that’s about 45 cents).  Erin and Brian had heard about a meat market they wanted to try.  We got off the bus, walked through town (which is also by the Pacific Ocean); stopped at a restaurant and ordered drinks so we wouldn’t have to pay to use the bathroom, then on with our journey.  After walking a number of blocks and several requests for directions later, we found the market.  Unfortunately, it’s only open in the morning.  However, Erin and Brian now know where the market is located and the trip provided us the opportunity to walk this quaint beach town and enjoy a ride on the bus

I must mention the importance of knowing the Spanish language.  In this section of Mexico, there are many Americans and Canadians which I thought meant that many of the Mexicans would speak English.  Perhaps they do in the resort areas.  However, knowing Spanish is of great benefit to convey what you need.  Alan and I were quite impressed with Erin and Brian’s command of the Spanish language.  I do not know how we would have managed without their ability to converse in Spanish with the people we met.  The people are so friendly and helpful but, without the words to convey your desires, the meaning can get quite lost.

morning announcements for the Gold Coast Net on VHF radio.  From 9 a.m. to 9:30 a.m. there is information and check-in by boats in the various moorages from south of Puerto Vallarta to Manzanillo.  The day’s weather is given, high and low tides pronounced, announcements and lost and found provided.  All of this is given by a volunteer in one of the anchorages.  The announcers may change daily but the informational points remain. I must remember the “French Baker” who makes a morning water route to the Barra Marina and Lagoon in a skiff loaded with baguettes, Danish, croissant sandwiches and tarts.

On Sunday we came back to Tucson.  Although we live in a very beautiful place, getting back into traffic, cacti, and no French Baker is a difficult adjustment.  Next stop–the Polynesian Islands?