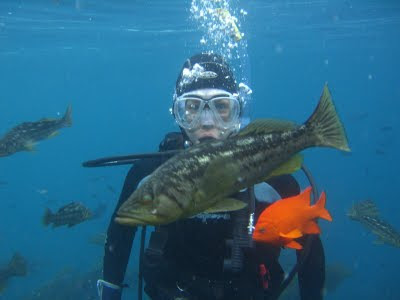 Catalina Island is known as a divers and hikers paradise. The water is warmer than the other Channel Islands and the visibility can exceed 50 feet on good days. There are miles and miles of trails that criss-cross the island with varying degrees of difficulty, some having a vertical gain of almost 2000 feet.

Our first anchorage in Catalina Harbor is very well protected on the south side of the island. The head of the harbor is completely filled with mooring balls available for $45.00 a night. Instead of paying we anchored in about 40 feet of water about 100 yards away from the moorings. We had no problem setting our anchors and having a longer dinghy ride to save the nightly fee! The water was clear enough that we could see our stern anchor drift all the way to the bottom.

The next morning we awoke to see Capaz off our starboard side after making the overnight passage from Channel Islands Harbor. The conditions looked ideal for a quick dive so we geared up and jumped off the back of the boat. We snorkeled towards Capaz and saw a variety fish along the way. Most notable were the bright almost iridescent orange Garibaldi. We descended in about 30 feet of water and swam around the thick kelp forest working our way back towards Delos and Capaz. In just over 40 feet we came across our anchor and chain lying on the bottom. Erin started gesturing for me to turn around. When I did I was face to face with a large bat ray gliding silently along the bottom. His wingspan must have been at least 6 feet. He wasn’t the least bit interested in us and continued on his way acting like we didn’t even exist.

At this point the island is an isthmus and just over ¼ mile wide. It’s a quick walk to the other side where there is a general store, dive shop, and a number of residences. We headed to shore the next day with our minds set on a hike along the north shore of the island. We planned on 7 miles but due to a slight misunderstanding with our cheapo map we ended up hiking nearly 15 miles. After a solid 6 hours of hiking we arrived back at our starting point and grabbed a couple of beers at the local pub to ease our pain.

Over the next few nights some other friends from Seattle caught up with us. Petter and Octavia on Bella Marina and Dick and Cindy on Mentor left Seattle a few weeks after us. We hadn’t seen either since leaving back in August. After 4 nights in Catalina Harbor we moved to Avalon on the other side of the island where we saw Bill and Kathy on Jarana, also from Shileshole. With four Seattle boats tied up on moorings we asked everyone to come over for a spontaneous taco-themed dinner night on Delos.

We sprung for the mooring buoys at Avalon because there is no good anchorage nearby and we wanted to explore the town and the dive park just off the steps of the old casino. The town population is nearly 3000 year round, but swells to 10,000 during the peak summer season. There are a few cars and trucks but most locals drive golf carts. Avalon is laid out around the semi-circular bay with the land growing steeper as you move inland reminding us of Positano in the Amalfi coast with the red and white tiled roofs gaining in elevation as they recede into the distance.

We made two dives in the Avalon dive park meeting Oscar, a 20 year old Sheepshead that inhabits the park. Once you descend into the park you’re surrounded by hundreds and hundreds of fish. The fish here are protected and are fearless of humans. They’ll swim right up to you, over you, and around you. They will even take food right out of your hand. I know this because for our last dive I bought some fish food from the local dive shop which created a minor feeding frenzy. Everywhere I swam a school followed me until I relinquished the last bit of food from by BC pocket.We took a video with the underwater camera!

Delos and crew are doing well however our water maker seems to be on the fritz turning out slightly salty water. We’re hoping that a cleaning cartridge from Dick and Cindy will do the trick to get the filters into shape again.

We’re off to Long Beach for the next 5 nights, followed by Newport Beach then San Diego. Mexico here we come ?