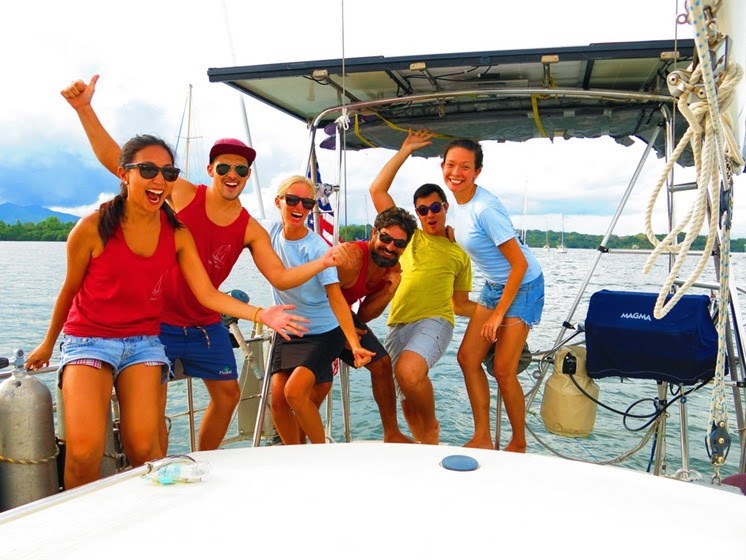 “10. Tubbataha Reef: This is the undisputed king spot for diving, comparable to Malaysia’s Sipadan, but enormous.  It’s an atoll way off in the Sulu sea and everyone without fail that I know that has been there has had nothing but ridiculous things to say that border on impossible.  The problem however is that it is a bitch to get to. “
– From Aidan’s 10 things to dive in the Philippines sent to Delos Facebook 9/9/13

So this is where the strange road that ran from internet fan boy to local tour guide led to, the main event, a cross country passage on Delos, and to Tubbataha no less.

Truthfully what scared me more than the reports of more sharks than you could shake a stick at, and the constant reminder from everyone we asked that the season was over (meaning that we could expect some nasty weather), was the revelation that we would be out of telco coverage.. Really out.  No internet, no emails, no cell phones.  Well this is the cruising life, and though I did what I could at work to prepare, raising anchor still saw me frantically banging away at my technology to squeeze off last emails, calls and downloads.

It wasn’t long before we had cruised out of Puerto Princessa, and to the point of zero bars.  The first few hours were fine enough, but once the sun went down, things started to get a little bumpy and we were all curious how we would fare.

“I’ve never quite seen water like this before” says Brian as we begin to bob around, swells pounding from varying directions, but no wind?  Strange tides indeed.  Distant thunder loomed but it was my turn for some sleep.  Couple hours later I get tossed around in the bunk and wake up to howling wind, I figure I’d go check on deck to see what’s happening and I caught enough light to see a salty looking sailor on deck.

Karin in her foul weather jacket had reefed the sails by herself as the gusts began to kick up to 40 knots and looked totally unperturbed, this sailor’s definitely got some solid sea miles behind her.  “Anything I can do to help?” I ask, still a little foggy, and wondering if we should be concerned with the worsening conditions.  She waves me away with her tea and I nodded back to sleep.

“I think we’re about 7 miles out.”  Brian comes out looking a little concerned, I see it’s 8am and we should be there already.  Last year the USS Guardian a US Navy Minesweeper was grounded at Tubbataha, the latest major victim in a string of boats that somehow missed the 375 sq mile atoll, due to the fact that the updated charts are reputed to be offset, by as much as… 7 miles.

Luckily we were running behind, and Brian brought up an early a map from the 1920s that had us smack where we were supposed to be.  We radioed in to the reef rangers and they suggested we tie on to “Black Rock” a mooring not far off from where we were, and (supposedly) sheltered from the swells.  We found it without too much trouble, and once we were tied up and settled I’d figured I’d jump in.

Gin clear water, with visibility further than I ever thought possible let me see straight down to the bottom, where a school of jacks, a dozen groupers, and four Sharks were lounging right under our keel.  This was going to be good.