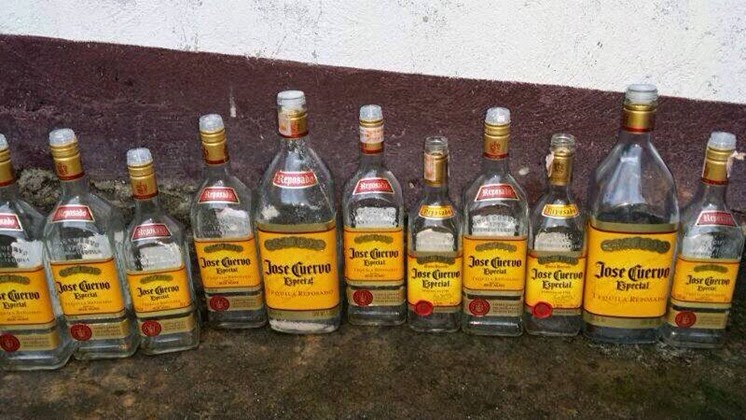 Our new Philipino Family- The Cholos!

“Brian- I think we should try to go!”  said Karin.  Go where?  This was my first thought.  Karin has this habit of bringing you right into the middle of her thoughts without any context so I was understandably confused.  After seeing the puzzled look on my face she mouthed one word.  SORSOGON!  Ah Hah!  Now I understood.

We were still in Puerto Galera shaking off the after effects of the Malisimbo Festival and were invited by our new friends Miguel and Andi to visit their family for Holy Week, in a place known as Sorsogon.  For the last 30 years or so their family has thrown a week long bash to celebrate Tequila and Easter, in that order.

The rumor is this isn’t a party to be missed.  Over the past decades it’s been fine tuned to be a week of  binge eating, imbibing in alcohol, and good old-fashioned adult foolishness.  Oh yea- and it was Easter too!  Easter is a big deal here in the Philippines.  There are parties, festivals, parades, self flagellation, and even live crucifixions!  The whole thing is a traveler’s dream come true.  Plus, how could we miss out on a local experience of this caliber?

Sorsogon is at the very southern tip of Luzon and the other side of the Philippines so we decided to do what normal people would do. Instead of a three day sail we would FLY!  We parked Delos on a mooring at Pearl Bay (near Coron, Palawan.)  and packed our party gear.  We talked to a fellow cruiser that was moored here for Typhoon Yolanda without any issue so they must be pretty beefy.  With Delos safely moored and being watched by no less than the staff of three resorts and one very helpful local boat-sitter (who charges a whopping $2 per day) we boarded a Philippine Airlines turbo-prop.  It took only 1 hour to get back to Manila, the same distance took us two weeks at our sailng (or snailing) pace.  Nothing goes upwind like an airplane!

To make things even better Karin’s brother Ragnar flew in from Sweden to meet us for a little break.  He’s recently back from his stint in Afghanistan in the Swedish Army so was overdue due for some R & R Pinoy style!  His first comment “Wow, instead of 100’s of shades of brown it’s 100’s of shades of blue!”

What ensued was incredible awesomeness that started with a 15 hour road trip and ended some 10 days later in a Korean spa.  But what really made this trip special was the experience of being brought into an incredibly tight group of friends and made to feel like we were part of the family.  The Philippines have been a very special place for us, especially since we met the self-titled “Cholos” in Puerto Galera.  They have made our visit to the Philippines amazing in so many ways and given us a view into this fantastic country and culture that would have been absolutely impossible without them.  Nothing beats local knowledge, and as far as local experience goes getting mixed into this group has been an eye opening experience.

Road trip in the Philippines done right!  Nothing beats a private van and driver ?

As we travel in Delos from country to country and island to island we’re always looking for a way to get in a little deeper with the locals.  To me that’s what traveling is all about, that’s how you learn about a different culture and country.  To make lasting connections with people and lifelong friendships.  We love private beaches and islands but really it’s always about the people.  When cruising the relationships with people you meet are often very intense and develop very quickly.  I think a large part of it is knowing that soon you’ll be leaving.  Almost like those intense friendships you had in high-school or summer camp- where you know you only have a few weeks or months to share company and so the relationships are compressed into weeks rather than years.  This is a fact of cruising.  You meet amazing people but ultimately if you’re sailing around the world at some point you hoist sails and head for the horizon.  We stopped saying goodbye’s after a point.  Now all we do is say “Until we meet again!”

Thanks so much guys, and “Until we meet again!”