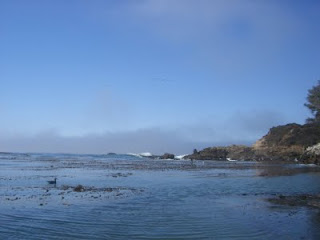 After a busy week in Monterey getting our PADI dive certifications we decided it was time to head further South. Our next stop was Pebble Beach about 25 miles down the coast. Since the trip was short we left after a leisure morning and lunch. Shortly after motoring out of the marina we caught some amazing breeze, hoisted all sails, and were soon sailing at over 8 knots out of the bay. We were sailing in the wrong direction (North back to Santa Cruz) but we didn’t care. We were off the dock and the sailing was exhilarating. We held our course as Delos cut through the swells with ease.

To get out of Monterey Bay you need to head due west for about an hour before turning south to clear Point Sur at the SW corner of Monterey Bay. The wind was on our nose but the seas were small and the ride was actually comfortable as we worked our way windward tacking up the coast. After a few short hours we arrived in Stillwater Cove and set our anchor among an abundance of kelp and feasting sea otters. Just a few hundred feet away through the fog and dimming daylight we could see the famous greens of Pebble Beach. The atmosphere was tranquil and perfectly still as the last breeze of the day settled with the waning sun. Erin and I sat in the cockpit of Delos enjoying a hot cup of tea while watching the sunset over the Pacific. Another mile or so to the South lay the town of Carmel by the Sea. This happens to be the beach where I proposed to Erin a few years back!

Our next stop San Simeon Bay lay about 70 or so miles to the South. We departed after a quick breakfast and finally got the NW breeze we’ve been looking for. The breeze was light hovering around 8-9 knots but at least we were headed downwind. We alternated between sailing and motor sailing through most of the day. On these passages down the coast we try to make the next anchorage before sunset. Anchoring in the pitch black in an unknown harbor is not very much fun so when our speed drops and the ETA on the Nav computer starts to creep up we crank up the trusty “Iron Genny” to keep moving along. In the afternoon the breeze picked up into the mid teens and we were moving along nicely running wing on wing downwind with our poled out Genoa and main sail.

Around 3:30 in the afternoon with Erin on watch I was reviewing the notes from our coast pilot book about San Simeon anchorage. Suddenly Erin yelled for my attention. She spotted something out of the ordinary just off our port bow that looked like a submerged rock. Both our eyes immediately went to the depth gauge still showing over 300 feet of water under our keel. Our position was good and we weren’t in danger of any shallow ground. Soon we both began to notice huge circular spots of water about 20 feet in diameter that were a distinctly lighter shade of blue than the surrounding water. We saw the spots to port, then to starboard. They were always just ahead of us and to either side.

Just as we were beginning to doubt our sanity I saw a black object rise out of the water and come slapping down with tremendous force. Our freeboard on Delos is about 6 feet. When you stand on deck your eye level is at least 12 feet above the surrounding water. What we were seeing towered above our heads. The object was at least 15 feet wide and was gone in the blink of an eye leaving a huge splash as it disappeared under the surface. It took us both a few seconds to realize that we’d just seen the hugest whale fluke we’d ever imagined. Here we were just a few miles off the California coast sailing peacefully along and we’re lucky enough to rendezvous with a pod of whales. Two of the whale’s surfaced less than 50 feet from our boat. Delos is 53 feet long and the largest of the whales was easily 1.5 times our boat length. The surge of adrenaline was hard to handle as thoughts raced through our minds.

We held our course and speed while the whales swam next to us for a few minutes. It was a little scary realizing the power and size of these creatures. I’ve personally read a number of accounts of sailboats damaged and sunk by whales. From what I understand at night sailboats have been known to accidently strike sleeping whales, usually to the demise of the boat. It was daylight and these guys definitely weren’t sleeping. Still at any moment we expected Delos to keel sideways due to some innocent behemoth of the sea trying to scratch his back. They soon lost interest in us and disappeared just as quickly as they came. We later looked up what we saw online and the closest match is the Blue Whale. They are the largest creature on the planet and can grow in excess of 100 ft in length! Unfortunately we were too slow grabbing the camera and didn’t get any photos.

We sailed to San Simeon without further excitement arriving after dark. Luckily our friends on Capaz arrived the day before and gave us great guidance getting into the anchorage at night.