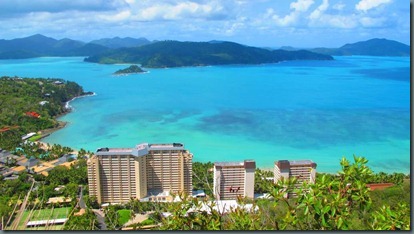 As I sit here writing this it’s been just over 9 months since we cast off the dock lines in New Zealand and headed back to the islands. 9 Months! It seems like just a few weeks ago we set sail for Fiji. Since then we’ve sailed just a bit over 8,000 nautical miles exploring Fiji, Vanuatu, Solomon Islands, and Australia, which is a pretty good bit of sailing.
The last 2 months were spent exploring northern Queensland between Cairns and the Whitsunday Islands, just east of Airlie Beach. We’d heard some good things about this area from nearly every Aussie we ran into (and a few Kiwi’s too) so decided to spend some time here. Our friend Rob came for a visit and took us to one of his old stomping grounds, Hamilton Island, where he worked about 10 years ago.
Hamilton Island is a peculiar place. There are no cars (only golf carts). There are 12 swimming pools. There are 3 huge resorts, 1 apartment building, and a bunch of multi-million dollar homes. There is a golf course, go-kart track, bowling alley, shooting range, chapel, gym, airport, night club, zoo, and some pretty sweet hiking trails. There are yoga and palates classes nearly every day. Sometimes on the way to the pub a wallaby hops in front of you and you realize “Hey- I’m in Australia!” Everything on the island (including the workers) are owned by Hamilton Island Enterprises. The only way on of off the island is by ferry so most of the 1,000 plus resort staff live there in company provided housing. It’s a little like living in a college dorm, but you have a job and you’re in your mid-twenties. It doesn’t take long before you start recognizing faces. The resort and Island as a whole caters to white, sunburnt, tattooed Aussie’s on their yearly holiday.
We pulled into the Marina and didn’t leave for about 6 weeks……. As marina guests (also owned by Hamilton Island Enterprises) we got full use of all the resort amenities, including some of the most awesome marina showers I’ve ever seen.
At some point I lost my entire crew as Brady, Paul, and Josje all had jobs on the island. I contemplated sailing to Brisbane by myself but the day before setting sail all three were laid off. On the same day! Is that fate or what? Crew problem solved.
So that’s what we’ve been doing for the last two months. Working at jobs, working on the boat, and doing a bit of diving and exploring on the Great Barrier Reef as you do. The pictures can describe it way better than I can.