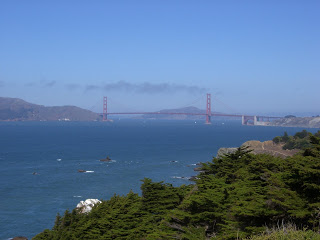 For the last week or so we’ve been tied to a dock at Schoonmaker marina- partly out of convenience and partly out of necessity. With much luck our new friend Kevin was able to dig our lost prop out of the mud of Richards bay in Sausalito. We got hooked up with Kevin through our friend Eric Rhone who is sailing his Cal 33 down the coast from Seattle right now. After telling Eric our story he mentioned that a buddy of his sailed down a week before. It turns out that Kevin is a commercial diver and quite skilled at his trade. Small world!

Kevin sailed down on a Cape Dory 28 and saw some pretty heavy weather including 60 knot winds off the coast. What a difference a week makes given our trip was so light all the way. Kevin’s wife Katie flew down from Seattle and met him in San Francisco. Their plans are to head down the coast into Mexico with an ultimate cruising destination of Chile in mind. They’re great people to hang out with so we hope to catch up with them at some point down the coast.

After finding the prop Kevin volunteered to help us pick out some gear at the local dive shop. I already had a vest and regulator but needed a good mask, fins, and tank. The plan was to get me outfitted enough to re-install the prop and dive the boat myself should anything else come up. While at the dive shop I asked about a dive compressor for the boat- we don’t want to be in an amazing dive spot hundreds of miles from the nearest dive shop and have empty tanks. The owner of the shop Jack just happened to know a guy with a used compressor for sale.

I called Tony about the compressor and we immediately struck up a conversation. The next day Tony dropped by the boat to give me a ride to check out the compressor. It turns out that he cruised around on a Mason 63 for a few years but had since sold his boat. He now lives in a huge house on top of the hills overlooking Sausalito with an incredible view. Even more incredible was that Tony had a basement full of treasures for any sailor. We’re talking fishing gear, diving gear, halyards, chain, sheets, and so on. You name it and there’s a good chance that it was in Tony’s basement. With my arms full of gear I felt like a kid in a candy store. Tony graciously offered us the use of his spare Jeep Grand Cherokee to run errands. He obviously understood the value of a car to a couple of cruisers new to the area.

For the past few days we’ve cruised around San Francisco in Tony’s Jeep. We drove to In-And-Out for burgers, the Mission District for ice cream, and Golden Gate Park for a hike. We even got take out Thai food just like home. The Sausalito Art Festival was in full swing over Labor Day weekend so we decided to drop by on Saturday. It turns out that the English Beat was playing. Anyone remember “Mirror in the Bathroom”?

There’s something about being on the dock that draws you in. Unlimited water and electricity. It’s easy to walk somewhere without a dinghy ride. There’s no worry about how well your anchor is set or if you’ll drift off in the middle of the night or bump the ground on a changing tide. It’s relaxing and peaceful. On the downside you feel a little tied down. You begin to miss the openness of the water and the freedom of dropping your anchor wherever you choose. There are more boats, more people, and more congestion. After a while you feel the urge to move on.

So after a week at the dock we returned our borrowed ride and cast off the lines. We are planning to head up the Napa River and check out wine country from a perspective that most people don’t get to enjoy. With any luck we’ll negotiate the shallow water of the narrow river and head up stream to what we here is a completely different climate. It’s supposed to be hot and dry with lots of vineyards, rolling hills, eucalyptus trees, and grazing cattle. Should be interesting!