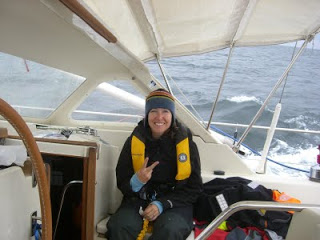 We woke up yesterday morning to clear skies and no fog! The forecast wasn’t ideal- light and variable winds out of the South (direction of our travel) but we decided it was time to say goodbye to Half Moon Bay and head further south to Monterey which is around 70 miles away. We did our normal pre-trip chores which include planning our route, stowing the dinghy on deck, putting away loose items in the cabin, and trying to medicate Mishka. She is still getting a little seasick on lumpy passages and we’re trying to use Benadryl to help sooth her. She won’t swallow pills and we don’t have the “force down the throat procedure” down quite yet so she went without on this leg.

We picked up the anchor without any issues and left the protective breakwater around 10:00AM. We expected light winds per the forecast and were prepared to motor for the entire trip which should take around 10 hours putting us into Monterey just after sunset at 8:00PM. As we rounded the corner of the breakwater a huge set of breaking waves came into view over the reef that we navigated on our way in. These were serious 12 foot breaking waves that looked capable of destroying anything in their path. After all the famed Mavericks break is just around the corner and can supposedly rival anything the North Shore can throw up. When you see displays of nature like this you’re reminded just how powerful the sea is, and how a single mistake can spell serious disaster. We stuck closely to the navigation channel with the thundering of the breaking waves a few hundred yards to our starboard side.

About an hour out we began to realize that the forecast matched in only one factor to what we were seeing. The wind was definitely out of the South but it wasn’t “light and variable” at all. There was a large swell running combined with the southerly wind chop whipping up 8-10 foot swells. We were seeing sustained winds of 25 knots with gusts into the 30’s. We decided to make a go of it and settled into our first tack with two reefs in the genoa, main, and mizzen. Even with the reduced sail area we still beat along at 8+ knots and the ride was uncomfortable to say the least. Mishka lost her breakfast and the rest of the Delos crew decided to reduce sail even more. We furled in more of all sails nearly dropping the main entirely and settled in for a long upwind sail.

There’s a reason why sailing close upwind is called beating. The crew and boat literally take a beating as you bash your way across seas heading in the opposite direction as the wind and wave trains. You claw for every foot gained against sea and wind, sometimes losing ground on a tack due to current or a wind shift. After 4 hours and almost as many tacks it was so disappointing to look back and still see Half Moon Bay barely visible off our port side. Under different circumstances it would have been almost 30 miles away at this point. We seriously thought about throwing in the towel and turning around but the sea and wind weren’t rising so we decided to carry on. This was our first opportunity to sail Delos on an offshore passage in these conditions and felt it was a good opportunity to learn more about the boat and ourselves.

We carried on for 10 hours beating, beating, and beating. We tweaked the sail plan and course to create the most comfortable motion of the boat while still making forward progress and settled into a rhythm. At some point Mishka even started feeling better and found a comfortable spot on a berth to take a nap. Most importantly we learned a ton about sailing the boat and ourselves in these conditions. Before we knew it darkness had settled in and Erin and I were on our first offshore overnight passage in inclement weather.

About 12 hours into our trip we started seeing a downpour of rain and put on our foul weather gear to stay as warm and dry as possible. We could see each rain squall on the radar like a huge, fuzzy blob working its way directly toward us. Along with the rain squalls we got a favorable wind shift that allowed us to sail 4 hours directly to Monterey without tacking at all. We spent the wee morning hours talking and snacking to keep us awake through the night. When that didn’t work we took short 1 hour watches and alternated between watching the boat and sleeping. About 12 miles from Monterey the wind completely died and we were left bobbing around making very little progress. We decided to motor sail the rest of the way to Monterey and arrived at 6AM. What we anticipated taking 10 hours turned into almost 18 hours but we arrived safe, if a little tired and salt sprayed.

At 6:00AM the poor soul working graveyard at the marina answered our call and even volunteered to come out in his launch to show us the way to our slip. Good thing he did! The approach was tricky and very narrow. I would have hesitated to try it during the day, much less before sunrise in our tired condition. After checking in he told gave us a map and immediately said there was a Trader Joe’s just up the street. Funny he said that since I didn’t even ask. Perhaps he saw the ravioli stains on my foulies and knew that we’d been sailing for a while. We haven’t been to the store since leaving Seattle and the fresh food is gone. We’re working through the frozen and canned stuff now.

We tied up, took showers to get the salt spray off and turned in for a much needed rest. We slept until noon and rose for a late lunch followed by ice cream, cappuccinos, and some random exploring of historical sites. Oh the cruising life…. Where else can you go from breaking seas to the history of the State of California within a few hours? Tomorrow we’re planning on heading to the Monterey Aquarium.